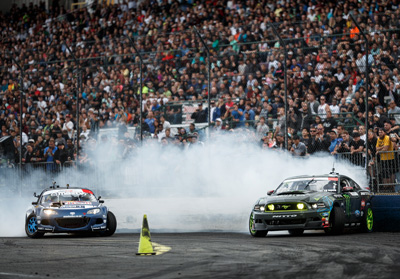 SEMA Ignited is the official SEMA Show after-party, where consumers are invited to connect with Showgoers and vehicles from the premier automotive trade show in the world. While the four-day SEMA Show is a business event that is not open to the public, SEMA Ignited makes it possible for auto enthusiasts, fans and families to be a part of the SEMA Show excitement. The inaugural SEMA Ignited event that took place in 2014 featured nearly 500 one-of-a-kind, customized cars and trucks, as well as nationwide television taping, celebrities, entertainment, music, food and fun.

Seating will be available for spectators to view the drifting demonstrations, which will begin at 3:00 p.m. and continue until the close of the event at 10:00 p.m. Other activities and entertainment at SEMA Ignited include a unique collection of vehicles from the SEMA Show, celebrity appearances, music and more.

To learn more about the event or to purchase consumer tickets, visit www.semaignited.com.