McQuarrie, making his World Challenge debut, cruised to a 49.535-second flag-to-flag victory in his No. 19 LPL/DRS/Switcars/LCS/Dayco/M&T Lotus Exige S.

Starting on pole, McQuarrie got a jump on the field on the first lap, aided in part by the poor luck of Peter Cunningham in the No. 43 Acura/RealTime Racing Acura TSX. Following contact with another car, Cunningham’s hood opened into the windshield of his Acura on lap one, forcing him into the pits that put him a lap down and ended any challenge the Series’ all-time wins leader could have given McQuarrie.

For more info World Challenge
“I had a great start and actually got by a couple of GT cars,” McQuarrie said. “I didn’t have a working radio in the race, so I didn’t actually realize who was behind me. I looked up at the screen on the second lap and saw one of the Acuras head to the pits with the hood up. I dialed it back just a little bit when I felt I could.”

“I have to really thank the LPL and DRS team. They only got this car about five weeks ago and really did a fantastic job with it. To be able to run it here at Long Beach—to run both weekends, is really awesome. I think April in Long Beach is a little bit like May in Indy. It’s a special time and to win here is just awesome.”

The GTS win was the first time a Lotus had won a race of any kind at Long Beach since Mario Andretti won the 1977 Formula One event in a John Player Lotus.

Acura/RealTime Racing’s Esayian finished a distant second to McQuarrie in the No. 34 Acura TSX for his third podium finish in as many races on the season. Michael Pettiford, of Louisville, Colo., finished third in the No. 41 Go4It Racing Schools/Hawk Chevrolet Corvette in finishing third.

Charles Espenlaub, driving as a replacement driver for Grey’s Anatomy star Patrick Dempsey, finished fourth in the No. 03 Mazdaspeed/Stoptech/ProParts MAZDA3. Dempsey practiced on Friday and Saturday, but was unable to make the race because of commitments to filming the television show.

Cunningham remains the GTS Drivers’ Championship leader with 358 points over Esayian (317) and Pettiford (275).

Despite being mired in traffic throughout the session, and a lengthy pause in the session due to a red flag, McQuarrie was able to hang on toP2 until the checkered in a competitive GTS class. Only multi-time series champion Peter Cunningham was able to turn a lap time quicker than McQuarrie.

“More than anything, being quick out of the box is a great thing for the crew that has worked extremely hard to get this LPL/DRS. Switch cars.com Lotus ready for World Challenge,” said McQuarrie. “Since this was the first appearance of the car in World Challenge, we just wanted to stay out of trouble and learn about how the car works on this track. We learned quite a bit, but we also realized that the team had done their homework since the car was very good from the beginning.”
As this race weekend marks the first appearance for McQuarrie, as well as the first appearance for the Exige S in World Challenge’s GTS class, the first practice left the team full of confidence for the rest ofthe weekend. While the Exige S excelled in the right confines of the Long Beach Grand Prix circuit, McQuarrie also excelled
in the concrete canyons of the track – no doubt due to his experience in drifting on the same course, inside the same walls.

“It’s like flipping a switch, going from drifting here lastweek to driving the Lotus this week,” said McQuarrie. “After spending all of last weekend scraping the walls with my back bumper, driving this car is almost like a piece of cake. It feels great to get back into a roadrace car, especially in the Long Beach Grand Prix. I can’t wait for qualifying.” 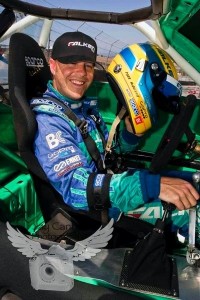