Formula DRIFT World Championship: Canada Round Results;
Fredric Aasbo at Top of the Podium in Canada 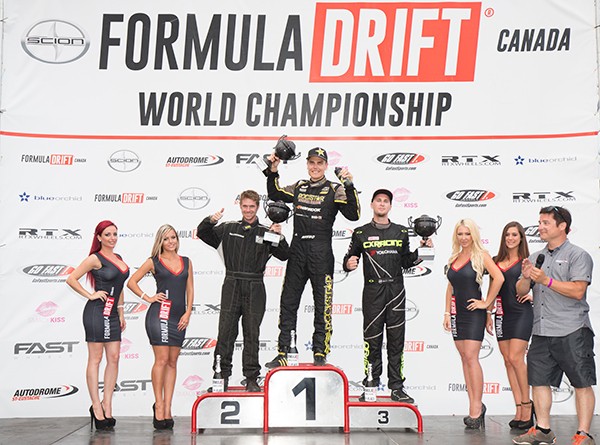 Formula DRIFT Canada at Autodrome St. Eustache was the second world championship round outside of the U.S. Thousands of fans came to witness the on-track action from 39 drivers that represented 8 different countries including the home country of Canada.

“Canada has shown to be a valuable market for the Sport and the Series. The fans here proved once again that they are some of the most enthusiastic fans in the world,” said Jim Liaw, President of Formula DRIFT. “The drivers awarded the fans with a dynamic and dramatic competition.”

The semi-finals pitted two World Championship contenders, Fredric Aasbo and Matt Field in a battle against each other. A mechanical issue with Field’s car caused a sudden power shut off which forced his car to straighten out giving Aasbo the win to advance to the finals. The other semi-final match-up was an all-Canadian battle between two Quebec locals, Tomy Boisvert-Bellemare in his Signature KCS Nissan S13 and Marc Landreville in his Perry Performance Nissan S14. Bellemare edged out Landreville to get to the finals to face World Championship points leader Aasbo.

In the final head-to-head battle, Boisvert-Bellemare challenged Aasbo with aggressive and close driving. Both drivers were near perfect in their lead and chase run, but a slight correction by Bellemare helped the judges make the unanimous decision giving Aasbo the victory.

“Hats off to all the local competitors who welcomed us to their home and put on an amazing show here this weekend in St. Eustache,” said Fredric Aasbo, winner of Formula DRIFT Canada. “The win here was the icing on the cake and great momentum for the team as we head into Irwindale next month.”

The 2015 Formula DRIFT World, Pro, and PRO2 Championships will continue to Irwindale Speedway: Final Fight on October 9-10 just outside of Los Angeles, California. For more information visit: www.formuladrift.com and find Formula DRIFT on Instagram, Facebookand Twitter. Tune into Formula DRIFT on CBS Sports and check your local listings for airtimes.