Huntington Beach, CA – February 20, 2011 – Bridges Racing is proud to announce their return to the Formula DRIFT series this year with one of the most respected drivers in the series, Robbie Nishida.

With years of professional racing experience, team owner, Bryan Bridges takes his talents to the world of drifting. Using the age old formula of a lightweight chassis and a high powered motor, Bridges Racing mates a 240sx with a VQ35. They didn’t stop there; with the help of Brian Crower, the Bridges Racing team took the 3.5L motor, bored and stroked it to 4.0L, strengthened the internals and added a Vortech supercharger to produce 630 whp and 580lb/ft of torque. Having piloted a VQ powered Nissan 350z and R35 Nissan GTR before, Robbie is no stranger to this motor.

Although his roots stem from motorcycle racing, Bridges attributes much of his racing experience and knowledge to drag racing. Bridges began tuning high performance Honda’s eventually becoming crew chief for the Castrol Syntec Acura Integra. The team went on to win numerous championships including the first NHRA Sport Compact Championship, as well as setting a number of world records.

During his tenure with Castrol, Dunlop Tires called upon Bridges to assist them in their efforts to enter the sport compact market. Bridges assisted in developing import drag slicks and tires as well as trackside marketing.

With a successful track record in drag racing and an admiration for drifting, Bridges decided to take a shot at professional drifting. In 2009, Bridges Racing campaigned a car in the Formula DRIFT season with Michihiro Takatori behind the wheel. Having obtained a lot of data from that season, the car has gone through various changes to become more competitive and reliable. In its current form Bridges Racing believes that with Robbie Nishida, they have found the winning combination.

Robbie Nishida will be making his debut with the Bridges Racing 240SX during Formula DRIFT Round 1 in Long Beach, CA on April 8th 2011. “I want to thank everyone that has helped me over the past few years to get to where I am now, but I am proud to say that I have a new start with a whole new team. This year I will be in a familiar chassis with a familiar motor in it. Hopefully we could move on with more success and I will be driving even more aggressively than ever” said Robbie Nishida.

Bridges Racing and its current sponsors are already looking forward to watching Robbie Nishida this Formula DRIFT season. “Robbie and the Bridges Racing 240SX is definitely a team to watch for. I am looking forward to the synergy of Robbie Nishida behind the wheel of the supercharged VQ powered 240SX. A car that all drifting fans can relate to” says Andrew Modena, President of Marketing for Button Marketing & Consulting, a Bridges Racing sponsor. Bridges Racing is excited to be working with Nishida this year and believes that their partnership will bring competition to other drivers and excitement to the fans. “Robbie is a class act and a top driving talent. I believe that if we provide him with the correct tools, we will see a string of podium finishes for the 2011 season” says Bryan Bridges, team owner of Bridges Racing 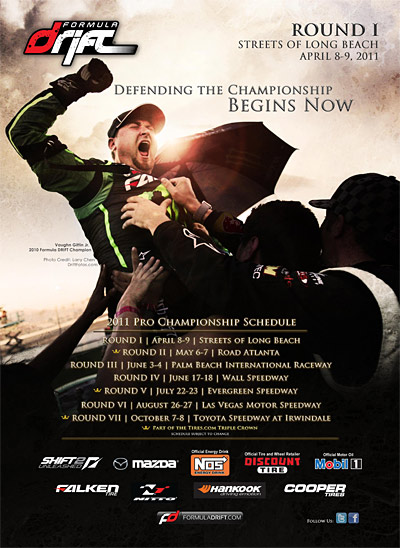 Long Beach, Calif. – January 20, 2011 – Formula DRIFT has announced the official 2011 Pro Championship Schedule of Events. Palm Beach International Raceway has been added to the list of venues and will host Round 3 on June 3-4, 2011.

“Formula DRIFT consistently pushes to grow the sport of drifting and entering our eighth year as a professional series we are proud of where we have been able to take the sport,” said Jim Liaw, president and co-founder of Formula DRIFT. “We are fortunate to work with the top venues for motorsports in the nation and provide quality entertainment to fans across the country.”

For the first time in several seasons Formula DRIFT has added a new venue and will visit South Florida at Palm Beach International Raceway in West Palm Beach. The newly remodeled facility features multiple state of the art tracks. Formula DRIFT will utilize the road course to create a unique drifting course that is to Formula DRIFT standards.

“I have been to the track since the new face-lift and it is truly a remarkable facility,” stated Ryan Sage, vice president and co-founder of Formula DRIFT. “From the course expansions, tarmac condition, lighting and the fact that it is situated in South Florida. Palm Beach International Raceway will be a great addition to the Series.”

The Formula DRIFT season begins on April 8-9, 2011 with Round 1: Streets of Long Beach in Downtown Long Beach, CA. Tickets will be available for purchase online through the Formula DRIFT website. A new website will be launched in the coming weeks. For information on when tickets go on-sale visit: www.formuladrift.com