A championship isn’t won in the final rounds, but it most certainly can be lost.

We’ve just wrapped Thursday practice at the sixth round of the 2017 Formula Drift championship at Evergreen Speedway, north of Seattle. Going into this event, the title race is still technically wide open, but I think that in reality, there are three main contenders.

At the top of the standings, in his first full Formula Drift season, is James Deane. With two wins so far in 2017, Deane has been top of the points standings since round three at Atlanta. It’s more than he ever could have dreamed of, considering that this year was intended as a recce year for the Worthouse Drift Team. 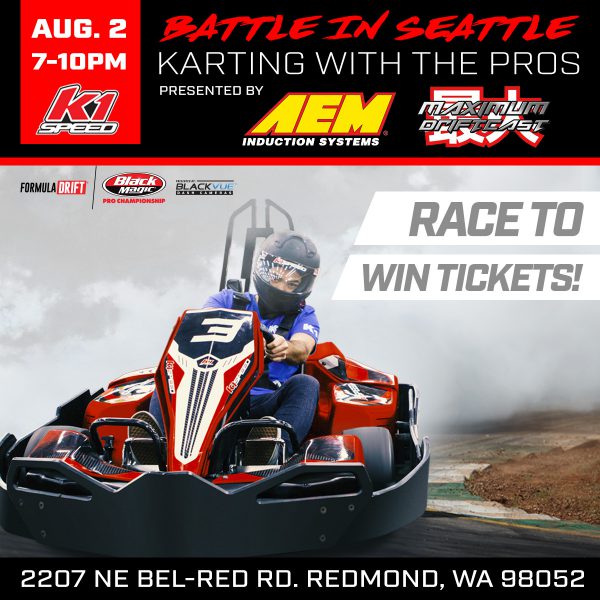 Set the weekly hot lap at K1 Speed in Redmond, WA and you could win tickets Round 6 – Monroe, WA.  Top fastest lap times will be entered into a drawing to win 2 tickets.

You won’t be blamed for thinking the race for points in the 2016 Formula DRIFT Championship was over after Round 5 at Autodrome Saint-Eustache in Canada last month. Going into Round 6 at Evergreen Speedway in Monroe, Wash., just outside of Seattle, a total of nine drivers bogarted the 15 podium spots up to that point, the three drivers at the top of the standings taking the lion’s share of wins, places and shows – with 2010 series champion Vaughn Gittin, Jr. in the Monster Energy Ford Mustang RTR earning two wins (at Road Atlanta and Wall Speedway), 2015 champ Fredric Aasbo in the Rockstar Energy Scion tC claiming two wins (at Orlando Speed World and Saint-Eustache) and a runner up (at Long Beach), and 2009 and 2014 champ Chris Forsberg in the NOS Energy Nissan 370Z picking up two second-place finishes (at Wall and Saint Eustache) as well as two third-place finishes (in Atlanta and Orlando).