Taka Aono is a pro driver in Formula DRIFT, the premier professional drifting series in the United States. He competes in a 1986 Toyota Corolla GTS, known among enthusiasts by its chassis code: AE86. He has been drifting competitively since 2003.

The progression of professional drifting in recent years has resulted in vehicles of enormous horsepower and build quality, and a shift in judging criteria that rewards high speeds and close proximity in tandem rounds. The general consensus among drivers and fans alike is the AE86, with its short wheelbase and low horsepower output, is no longer competitive in professional level drifting.

Taka has competed in every round of Formula DRIFT since its inception in 2004, and he has done so in his AE86. 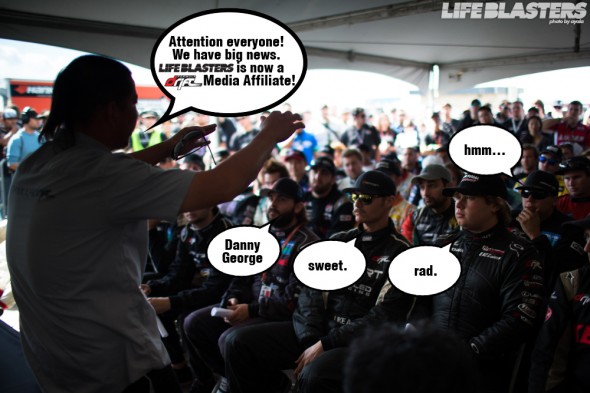 Life Blasters is holding a contest and this Friday (4/5/13) they’ll be giving 2 winners a pair of general admission tickets to Round 1: Streets of Long Beach.

Here’s how the contest works:

-Submit your guess of how much horsepower Taka Aono’s 2013 Formula DRIFT Championship AE86 will produce by leaving a comment in the comments section of their article.

-Be sure your first and last name is included in either the user name, or the comment text.

-This Friday 4/5/13, they will select the 2 guesses that are closest to the actual horsepower number and award each winner with a pair of General Admission tickets to Formula DRIFT Round 1: Streets of Long Beach!