Vaughn Gittin Wins His Second Consecutive Event at Round 5: Throwdown;
Takes The Lead in the Pro Championship Points Standings 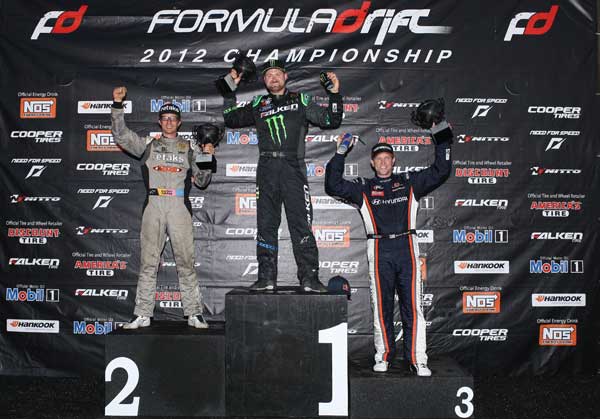 Round 5: Throwdown continued the success of the season to a capacity crowd at Evergreen Speedway. The Driftstream saw an estimated 175,000 viewers in a 24-hour period.

“This has been one of the most exciting events of the season,” said Jim Liaw, president and co-founder of Formula DRIFT. “The chase for the championship heats up as we head into the final two events of the season and it is still anyone’s to take with only 62 points separating the top 5 drivers.”

The action on the track showcased the true competition of the Series with many close battles and upsets throughout the event. Ken Gushi in the Greddy Performance Scion FR-S faced Hankook teammate Rhys Millen in the RMR Hyundai Genesis Coupe in a very close battle. Millen took the victory for third place and his first podium appearance of the season. The Finals pitted Ryan Tuerck in the Retaks Nissan 240SX against Vaughn Gittin, Jr. After a tightly fought battle Gittin took the win and the lead in both the Pro Championship points standings and in the Tires.com Triple Crown, while Tuerck moves up to fifth place overall.

“I am just so pumped right now. We have been working so hard and have overcome the minor issues we had earlier this year and I owe this to my team and all my partners,” said Vaughn Gittin, Jr., winner of Round 5: Throwdown. “It just feels so good to re-focus and drive my heart out and stand on top of the podium!”

The competition is as close as it has ever been with only two remaining events remaining and the championship still up for grabs. The Formula DRIFT Pro Championship Round 6: After Dark on August 24 – 25 at the Las Vegas Motor Speedway.