Rhys Millen is Victorious at Formula DRIFT Round 6: After Dark;
Championship Will Come Down to Final Event of the Season 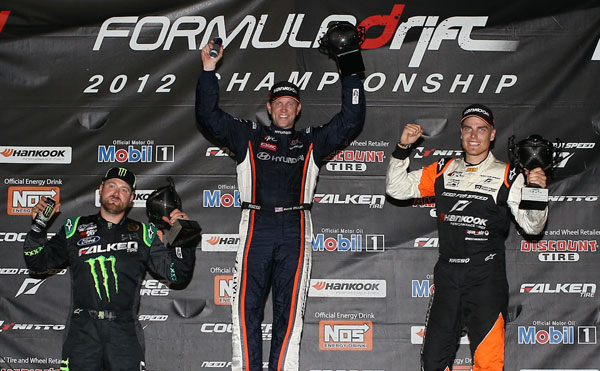 Long Beach, Calif. – August 26, 2012 – Formula DRIFT returned to the Las Vegas Motor Speedway for Round 6: After Dark. Rhys Millen in the RMR / Hankook Hyundai Genesis Coupe takes the victory and moves up to third place in the overall points standings leading into the final event of the season.

Round 6: After Dark brought drifting back to Sin City and treated fans to a night spectacle that included the Vegas ProAm championship, Slammed Society car show, Targa Trophy display of vehicles and more. The Driftstream saw an estimated 150,000 viewers in a 24-hour period.

“The Las Vegas round of competition is always one of the most action-packed, but with a completely new course it challenged the drivers and excited the fans,“ said Jim Liaw, president and co-founder of Formula DRIFT. “Each year we have seen an increase in attendance and have accommodated with the addition of extra grand stands. This was a very exciting event to lead into the championship round in October. This was another tight championship chase with three former champions in the top five.”

A new track configuration was added to the event at the Las Vegas Motor Speedway giving an extra challenge for the drivers to adjust to the new course along with the weather conditions of the desert. Robbie Nishida in the Bridges Racing / Achilles Tires Lexus SC300 faced points leader Vaughn Gittin, Jr. in the Monster Energy / Falken Ford Mustang in a battle for third place. Gittin took the win and secures his point lead in the chase for the championship. The final battle pitted second place qualifier, Rhys Millen, fresh off his record setting victory at Pikes Peak in the same Hyundai Genesis Coupe that he competed in at this event, against the number one qualifier, Frederic Aasbo in the Need for Speed / Hankook Scion tC. On his lead run, Aasbo met the wall to give the advantage to Millen. On the second run Millen kept a consistent line to take the victory moving him to third place overall and within striking distance of the point leaders.

“It was an incredible victory for our entire crew at RMR, for Hyundai, Pulse and Hankook. To come here from Pikes Peak in the exact same car in a different configuration and in a different driving style and to do it back to back,” said Rhys Millen, winner of Round 6: After Dark. “This is a true drivers course and suits the car well and we were flawless all day long. Unfortunately, some of our competitors gifted us a couple wins, but at the end of the day we put the pressure on them to run deep and fast.”

The chase for the championship is as tight as it has ever been and will be decided at the final event of the season. The Formula DRIFT Pro Championship Round 7: Title Fight on October 12-13 at Irwindale Speedway. Tickets are on-sale now and can be purchased on the Formula DRIFT website.

4 National Pro Am Invitations will be awarded.

Drivers that prove their ability to compete and portray themselves on a professional level at this Formula DRIFT /Pro Am event will be eligible to compete at the Championship Event held December 5th 2009 – Firebird International Raceway – Phoenix, AZ.

For Rules and Regulations visit: www.proamdrift.com