Formula DRIFT teams will drift for the first time during a WTCC weekend on September 6-8, 2013 at Sonoma Raceway adding to the long list of appearances for the Series during national and international motorsport events. This will also be the first time in 3 years that Formula DRIFT professional vehicles will return to the venue. Drivers from the Series to participate include Michael Essa, Toshiki Yoshioka, Pat Mordaunt and past Formula DRIFT pro Ryuji Miki.

“It should feature some high-speed drifting action,” said Matt Johnson,
Yokohama performance marketing supervisor. “This is a great opportunity to
showcase drifting and Yokohama tires to WTCC fans. This is the only WTCC
race this season in the U.S. and the highly competitive global series also
features Yokohama tires.”

“Another treat for fans is a special appearance by Ryuji Miki, a former D1
Grand Prix drift champion and Formula D competitor,” said Johnson. “Miki is
flying in from Japan to pilot the A’pexi Lexus SC430 during some of the
demonstrations. He is also competing on AD08 R tires with a Nissan S15
Silvia in Japan’s D1GP series.”

Yokohama Tire Corporation is the North American manufacturing and marketing
arm of Tokyo, Japan-based The Yokohama Rubber Co., Ltd., a global
manufacturing and sales company of premium tires since 1917. Servicing a
network of more than 4,500 points of sale in the U.S., Yokohama Tire
Corporation is a leader in technology and innovation. The company’s complete
product line includes tires for high-performance, light truck, passenger
car, commercial truck and bus, and off-the-road mining and construction
applications. For more information on Yokohama’s extensive product line,
visit www.yokohamatire.com.

Yokohama is a strong supporter of the tire care and safety guidelines
established by the Rubber Manufacturers Association and the National Highway
Transportation and Safety Administration. Details can be found at the “Tire
Safety” section at www.yokohamatire.com. 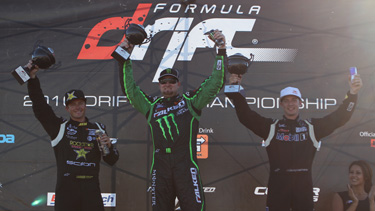 Formula DRIFT Announces Schedule Change for 2009 Season;
Round 6: Locked and Loaded to be Added to the Indy Grand Prix of Sonoma on August 21-22, 2009

Long Beach, Calif. – June 25, 2009 – Formula DRIFT has announced a schedule change for the 2009 season. Round 6: Locked and Loaded at Infineon Raceway will be re-scheduled from September 12 to August 21-22. Formula DRIFT has been added to the Indy Grand Prix of Sonoma race weekend.

“Formula DRIFT continues to bring drifting to the big leagues with the addition of our event to the Indy Grand Prix of Sonoma,” said Jim Liaw, president and co-founder of Formula DRIFT. “Motorsports fans will be able to experience the 110+ mph average speeds of open wheel racing and all the sideways action of Formula DRIFT in one weekend.”

Formula DRIFT drivers will be amongst the biggest stars in IndyCar racing, including Helio Castroneves, Danica Patrick, Dario Franchitti, Marco Andretti, Graham Rahal, and more. Fans will be treated to both drifting and IndyCar Series racing during the Indy Grand Prix of Sonoma weekend. Tickets may be purchased on the Formula DRIFT website, 2-day Friday/Saturday pass will run $35. Special ticket discounts will be available through various Formula DRIFT media and promotional partners.

The Indy Grand Prix of Sonoma will be held on the weekend of Aug. 21-22 at Infineon Raceway. The Formula DRIFT Pro Championship Round 6: Locked and Loaded is scheduled for August 21 and 22. The change in the schedule will open up a longer break heading into the Finals in Irwindale on October 16-17 leaving time for teams to prepare and for Formula DRIFT to organize promotional activities leading into the Finals.