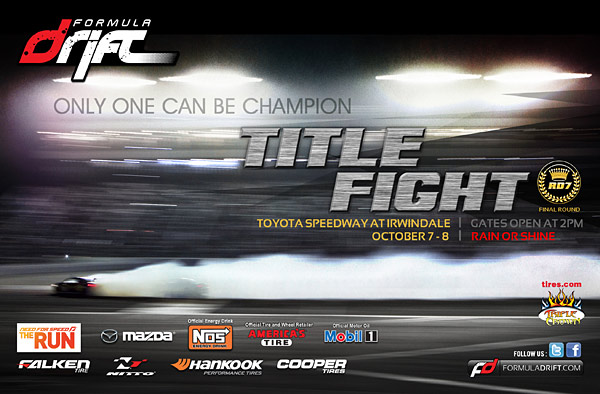 Long Beach, Calif. – September 14, 2011 – Formula DRIFT prepares for what many are anticipating as the largest event in Formula Drift history with the finale at the Toyota Speedway at Irwindale. Round 7: Title Fight ending one of the most exciting seasons to date on October 7-8. Tickets are on-sale now.

“Round 7: Title Fight is slated to be the largest drift event in our history and we are on pace for another capacity crowd,” said Jim Liaw, president and co-founder of Formula DRIFT. “To encourage fans to purchase their tickets early and guarantee their spot at the Finale we have partnered with a few of our sponsors to give away some great prizes to lucky pre-sale ticket buyers.”

Along with the purchase of tickets, Formula DRIFT will be holding a contest for all pre-sale ticket buyers.

For those that purchase 2-day Reserved Grandstand Tickets, the following prizes will be raffled off:

For those that purchase VIP Tickets:

– One (1) individual will receive two (2) tickets to the Formula DRIFT Awards Banquet being held on October 9, 2011 with one (1) night hotel stay at the official banquet hotel. Winner must be 18 or older to qualify.
– One (1) individual will receive an $800 credit toward any set of Falken Tires redeemable at any America’s Tire / Discount Tire location. Labor costs not included.

Winners will be announced on September 26 on the Formula DRIFT website, www.formuladrift.com. Prizes have no cash value. More prizes to be announced at a later date. Each ticket purchased counts as one raffle ticket.

Tickets are available for Round 7: Title Fight on October 7-8, including reserved seating, 2-day ticket packages, and VIP tickets. Tickets can be purchased through www.formuladrift.com. Ticket prices start at $26 online. 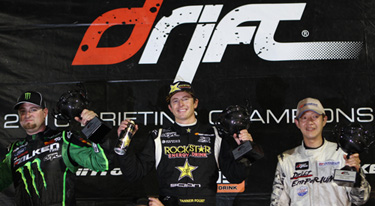 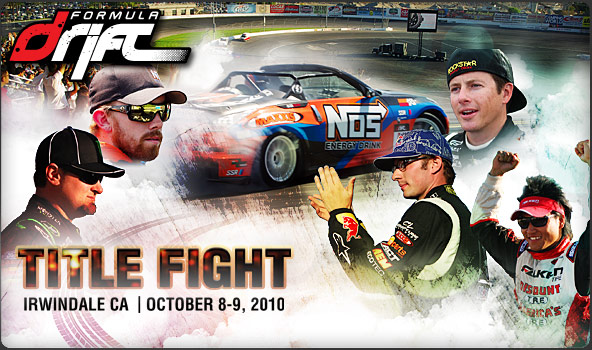 Formula DRIFT Announces Schedule Change for the Pro Am National Championship;
Event will now be held on November 21 at the Toyota Speedway at Irwindale

Long Beach, Calif. – October 1, 2009 – Formula DRIFT has announced a schedule and venue change for the 2009 Pro Am National Championship. The event will now take place on November 21 at the Toyota Speedway at Irwindale.

The top amateur drivers from the United States and Canada will meet at the infamous “House of Drift,” at the Toyota Speedway at Irwindale. This will be the first time that a Pro Am competition of this level will take place at this location. The rising stars of drifting will be discovered and compete for their chance to earn a Formula DRIFT Pro Championship license. Current professional drivers that made their way up through the Pro Am circuit include Justin Pawlak, Ryan Tuerck, Joon Maeng, and Matt Powers.

“Bringing the FD Pro Am National Championship to Irwindale is not only very cool, but very symbolic as well,” said Jim Liaw, president and co-founder of Formula DRIFT. “Never has a Pro Am competition of this magnitude and importance been held at Irwindale before. And to top it off Irwindale is the birthplace of American professional drifting, back in 2003 when Ryan and I brought D1 outside of Japan for the first time.”

Tickets for the Pro Am National Championship will go on sale on October 17, the same day as Round 7: Judgment Day the final event of the 6th season of the Formula DRIFT Pro Championship. Online tickets can be purchased on the Formula DRIFT website. For more information, visit: www.formuladrift.com.

Note: In addition to the listed drivers, all current Formula DRIFT Pro License holders that do not meet the minimum points for automatic renewal will be invited to this competition. Alternates and additional drivers will be added to the list pending the results of upcoming Pro Am events.